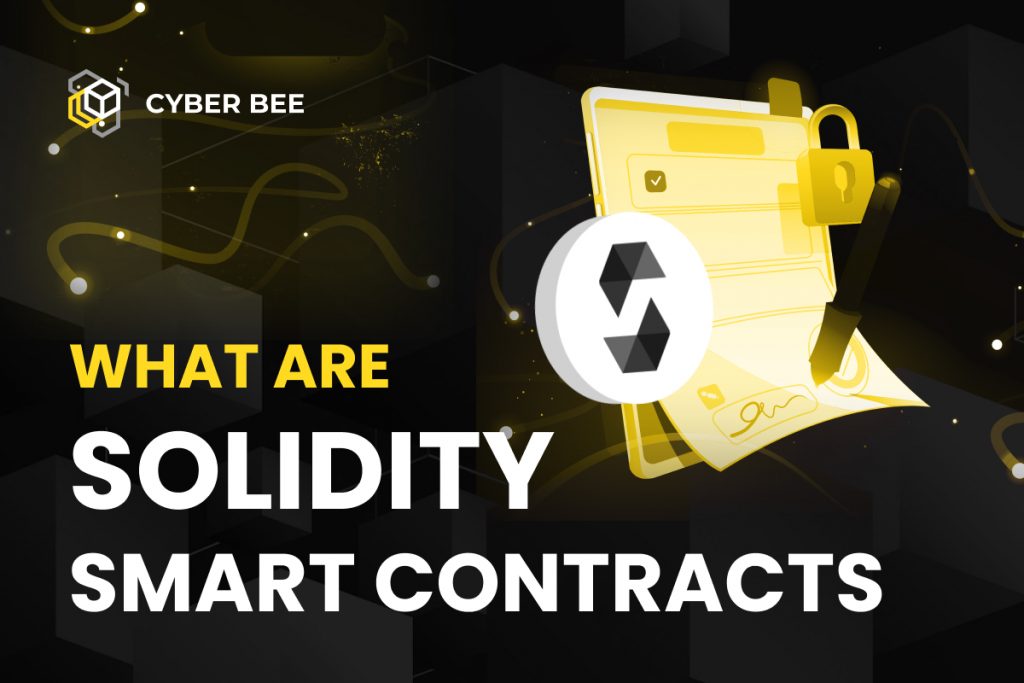 What are Solidity Smart Contracts?​

The term “blockchain technology” wasn’t widely used outside of Bitcoin circles until about a decade ago, when developers started using Solidity programming to build smart contracts on the Ethereum, a decentralized layer-1 blockchain that executes and verifies peer-to-peer smart contracts.

When developers began coding Solidity smart contracts, the true potential of Web3 was revealed, leading to a universal explosion in blockchain use cases. Web3 contracts, such as Ethereum smart contracts, enable new forms of commerce and use distributed ledgers for better supply chain management, promote digital collectibles (such as NFT’s) and facilitate instantaneous and secure payment and financial transaction processing without the need for a central authority.

This article provides a thorough introduction to the Solidity programming language as well as a deeper dive into blockchain technology topics.

Perhaps many of us are unhappy with the real world, and so we are searching for methods of communication on networks that cannot be governed by centralised authorities and untrustworthy intermediaries. We are transitioning from an era of centralised authority to one in which power is more widely distributed. In this digital, decentralised marketplace, participants are are able to operate freely still availing of the benefits to transparency.

The internet is developing at a breakneck speed thanks to the prospect of Web3, a new generation of the internet that will put control of the network back into the hands of individual users. Blockchain technology is the only thing that even comes close to making this possibility a reality. Let’s look into the blockchain technology and the smart contracts that have been developed using Ethereum’s Solidity platform!

Then, why is the technology behind blockchain so revolutionary? To begin, it removes the need for third parties to broker transactions, making it possible for anybody to make a transaction directly between two parties. As a corollary of this, we are able to complete tasks rapidly efficiently.

For example, if you want to transfer cryptocurrency between users, you don’t need a bank, notary, or broker to certify or authenticate the transaction. Similarly, if you want to buy something with bitcoin, you do not need an intermediary. Because each transaction is saved on the blockchain in its own block, it is incredibly difficult to falsify, alter, delete, or steal the assets involved in the transaction.

Smart contracts, which are essentially strings of code, provide all of the information required for a safe, secure, and authentic transaction between participants. But what are smart contracts exactly, and why are they so important in the Web3 world?

Once upon a time, blockchain technology use cases involved cryptocurrencies. Solidity, however, is a fresh new programming language that was developed by programmers in 2014. Solidity was created with the goal of making it simpler to create smart contracts that are both scalable and adaptable.

The Ethereum network, driven by the Ethereum Virtual Machine (EVM), is utilized for the execution of Solidity smart contracts and the insertion of these contracts to the blockchain. In order for smart contracts to be widely implemented, the Solidity programming language had to be kept as simple as reasonably possible. As a result, it would be simple for untrained coders to learn and apply.

To better mimic a real human contract transaction, Solidity also needed to be more human-like (high-level) and object-oriented (contract-oriented). The founding programmers adapted the most appropriate components of well-known programming languages to create this type of elegant language. Python, C++, and JavaScript were all included. Then they made Solidity. Instead of using ones and zeros, the Solidity programming language employs curly brackets and “if/then” statements to handle complex user inputs.

Because Solidity is both versatile and contract-oriented, it is perfect for designing smart contracts for a wide variety of decentralised applications (dapps). Depending on their complexity, developing Dapps can be challenging and time-consuming, especially for people who are new to programming.

What are Solidity Smart Contracts?

Solidity smart contracts are code strings written in the Solidity programming language. These specify the terms and conditions that all parties involved in a transaction must satisfy before the contract can be executed.

Each completed smart contract is assigned a public key, which is a string of randomly generated numbers that serves as its address. This is done so that anyone can verify its existence. Although the smart contract is permanently stored on the blockchain and is accessible to everyone, this does not mean that everyone can view its contents. Only the contract’s parties receive a private key, which grants them access to an unencrypted version of the smart contract.

When the blockchain stores the smart contract on its chain, the transaction is irreversibly confirmed. Encryption and block confirmation are crucial components of blockchain technology because they make it nearly impossible to manipulate or corrupt data. To alter a smart contract, a hacker would have to alter the code in each block. This is a challenging, if not impossible, endeavour. Because there are no middlemen engaged in the transaction process, smart contracts can execute automatically at any moment. Smart contract transactions therefore present a game-changing means for all parties to enter into agreements.

You must sign up for a Web3 wallet in order to build and execute a smart contract on a blockchain. This wallet can be used to store your coins and assets, public and private keys, and transaction-related data.

Each smart contract transaction necessitates the deposit of “gas,” also known as a “gas fee.” As a result, whenever a user interacts with an Ethereum dapp, the user must pay for the gas needed to run the Solidity smart contract. Although each user can choose how much gas to spend on each smart contract, the more currency a user reserves for a transaction, the faster it is executed and verified by miners. This is primarily because miners prefer to validate more profitable smart contracts. As a result, miners and node owners can profit by contributing to the growth of the blockchain. However, this is not always profitable because it necessitates expertise, specialised equipment, and the necessary know-how.

Use Cases for Solidity Smart Contracts

Since Solidity’s smart contract architecture is highly configurable, its utility is not limited to crypto currencies like bitcoin and ethereum. Decentralized applications (dapps) in the fields of banking, the arts, real estate, gaming, social networking, and crowdfunding are all attainable thanks to Solidity’s smart contracts. Smart contracts can be implemented in a variety of ways depending on the industry, but they all use tokens. Tokens’ values can be established in advance, as with cryptocurrencies, or they can be set by market forces, as with NFTs whose worth is tied to factors like scarcity and demand.

Imagine having the ability to buy, sell, send, borrow, and invest in anything, at any time, in any part of the world, and with whomever you choose. Decentralized finance, often known as DeFi, is the future of finance, and cryptocurrencies and blockchain technology will serve as its pillars.

Using blockchain technology, it is now possible to sell or trade virtually any tokenized creation. NFTs are likely the most recognisable tokens. These tokens can be pieces of art, music, film, text, or even a URL. Consider the token’s popularity, scarcity, demand, rarity, collectability, market value, etc. when determining its value. The intriguing aspect of NFTs is that the purchaser does not necessarily own the art. The buyer essentially purchases bragging rights to the original digital artwork as the sole owner, not the art itself.

Crowdfunding is one of the most neglected blockchain markets, despite being one of the most promising blockchain applications. Contributors to decentralised crowdfunding platforms can own a portion of the funded project. When people have a stake in a project, they feel a genuine sense of participation and investment in it. Due to numerous middlemen fees and stringent donation eligibility requirements, traditional crowdfunding can be time-consuming. Decentralized crowdfunding sites that use smart contracts can also function as financial instruments, as users can earn money from the projects they support.

Gaming has emerged as one of the most interesting, popular, and lucrative integration of smart contracts. People have built entire universes (metaverses) on blockchains, where user interaction is frequently the game itself. Other NFT games, such as Axie Infinity, are “pay-to-earn” games in which users receive rewards for participating in various aspects of the game. Furthermore, there is a wide range of blockchain gaming themes. These themes range from trading card collecting to exploring far-away universes to sports games like fantasy football.

What are Solidity Smart Contracts – Summary

The Internet is transitioning to Web3, and the new decentralised frontier necessitates the development of high-quality decentralised applications (dapps). Dapps are smart contract-driven blockchain-based applications. What’s more, they can perform a wide range of transactions between participants quickly, securely, and permanently, without the risk of corruption or censorship. They are also verified directly between users, removing the need for intermediaries such as banks, notaries, and brokers.

Cyber Bee provides all of the tools you’ll need to complete the job quickly and efficiently. As a result, your dream concept may become a reality! Will you take part in Cyber Bee’s Web3 revolution?

If you think cookies are just cookies 🍪, please read the following link , if you don't, just hide this message.